Boys and girls, a strange week it is indeed, and it’s only Monday.  First, I read an article by Sr. Mary Ann Walsh in “America” magazine touting the Catholic Church as superior in offering career advancement opportunities for women as compared to secular industries.  Then I gazed upon the bizarre female bondage artistic choice for the cover of the Pontifical Council on Culture’s working document regarding women. (see image below...) 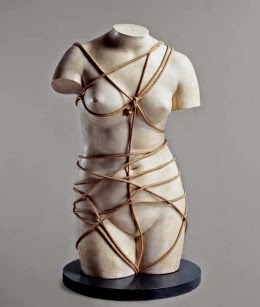 It must be “happy irony week” in the Catholic Church because what else explains all this?

Let’s first enjoy the "America" magazine article’s irony in and of itselt.  However, I will preface my comments with this thought: I work in the secular world as an executive and I’ve also done a lot of volunteering in the Catholic Church.  “Career advancement opportunities for women” just has never been a phrase I use when describing the Catholic Church…never…not once.

Sr. Mary Ann’s article highlights statistics indicating the percentage of women CEOs for Catholic affiliated organizations such as hospitals is higher than for secular companies.  She fails to mention that those institutions cannot call themselves “Catholic” without the approval of the reigning bishop, the CEO of the local diocese.  How many of those bishop/CEOs are women?   The answer is “the empty set.”

Furthermore, many of those Catholic institutions were created by religious sisters – the same women who of late have been labeled by the reigning (male) hierarchs as being “radical feminists” as though they suffer from some incurable terminal disease.  So, I’m trying to get this straight… Women who lead Catholic institutions are not radical feminists when they can be used as decoys for diverting attention from the church’s stifling sexism and discrimination?  But when those women try to act in any way with which the local bishop/CEO disapproves, then they are labeled “radical feminists" and fired?  Way to showcase those female leadership opportunities the church offers…

There’s also irony that an article about the virtual cornucopia of church female leadership opportunities appears in “America” magazine, a Jesuit periodical…because the Jesuits have precisely zero women in their organization.  ‘Tis true; the Society of Jesus…an organization named after a guy whose society carried signature inclusion of women…does not itself permit women to join.  Instead they adhere to a pre-US civil rights era segregationist’s mentality of “separate but equal.”

And then there’s the irony that the woman who wrote the article takes a check working for the Society of Jesus.  But then Sr. Mary Ann also works as the Media Relations Director for the US Conference of Catholic Bishops…another group which has had precisely zero female CEOs.  Therefore, in both of her communications roles, Sr. Mary Ann answers to men.  I guess it’s actually more a case of tragic irony than comical irony that she whose public voice requires male approval wrote an article boasting about the church’s advocacy for women.  That perhaps signifies the extent to which male hegemony can impact some people’s thinking.

But, the most exquisite irony comes from the timing of the article’s publication - the same week that the Pontifical Council on Culture holds a four-day Plenary Assembly to discuss women’s culture.  The council’s members include how many women?  Oh, that would be zero again!  See, women have advanced so far in church leadership that a Pontifical Council can gather...completely straight-faced...without women members and feel they are qualified to make decisions about women.  Nothing says “we really value you gals” like excluding them from the pontifical council that’s going to discuss them.

I don’t mean to complain or be fussy but let me just give a quick demographic run-down on the council’s members and you decide for yourself just how in-touch these guys are with women around the world…  There are 13 Cardinals, 5 Archbishops, 8 Bishops, 1 Monsignor, 1 Rector (yes, he’s a priest; did you even need to ask…) and 3 Laymen.

Since these guys are…well guys…and they wanted to get together for four days and do nothing but talk non-stop about girls…they had a bright idea.  No, it was not to invite women to join their council as members…what, are you drunk?  No, they had some Italian actress make a video asking women to submit one minute or shorter videos about who they are…because evidently they believe nothing of importance about women requires more than a minute to explain.  By the way, I sent them a link to my blog but I did not get an invitation to participate in their meeting.

The irony of the 31 all-male membership writing the following statement as the opening salvo of their working document about women just kind of says it all…“In our Plenary, the invaluable contribution of our Members and Consultors will allow us to gather some aspects of women’s cultures in four thematic stages, in order to identify possible pastoral paths which will allow Christian communities to listen and dialogue with the world today in this sphere.”  You see, they’re going to “listen and dialogue” about women by not listening to or dialoging with them.  This is clearly miracle fodder.

That’s really the high-point of the working document.  It just goes downhill from there with sexist ideas and language.

In fairness, I must mention that 7 of the 35 Consultors are women – 2 religious and 5 laywomen.   So the members are 31 men and then there are 28 more male consultors bringing the male attendee count to 59 as compared to 7 women consultors.  I just have this sneaking suspicion that those 7 women have been carefully vetted and chosen based upon their parrot-like ability to repeat what the hierarchy says about women.  I am not expecting them to contribute in a way that represents me or women like me or pretty much the majority of women in the world.

The four themes they will discuss are:
Theme 1: Between equality and difference: the quest for equilibrium
Theme 2: “Generativity” as a symbolic code
Theme 3: The female body: between culture and biology
Theme 4: Women and religion: flight or new forms of participation in the life of the church

As a woman, albeit one whose voice is not desired to contribute to this discussion since we have those 31 male council members who are way more qualified to talk about being female than me, the themes tell me more about the men who wrote them than about women.  Are you really struggling with the concept that equality can exist within a diverse population?  Do you really think that women who leave the church (often with the kiddies in tow) are forming a new way of participating in church when they say, “this place has a toxic sexist culture that I can’t tolerate anymore?”  By the way, there are women who are doing this; they’re called women priests.  You’re not too keen on them the last I recall.

The theme regarding the female body doesn’t mention anything about correcting the mountains of theological conclusions drawn from scads of inaccurate understandings about human biology.  Instead it talks about that really pressing woman’s issue…plastic surgery???  And quite frankly, I’ve read and re-read the section about "generativity as symbolic code" and it truly beats the ever-loving shit out of me as to what that’s supposed to be about.

So, I wish the council well in its discussions.  I imagine its meeting outcomes will be more a source for entertainment than theological insight about women because it begins on faulty ground: it’s a meeting about women called by men in a council with exclusively male membership to provide guidance to an exclusively male clerical population.  If this truly were about listening to and dialoging with women, it would be led by women, with a majority of council members as women.  It would consider new ways of being church including female ordinations.  It would talk about more substantive topics related to female human biology than plastic surgery.

Well, I better get off this merry-go-round of irony lest it make me any more dizzy than it already has. But my parting thoughts are these.  What were you thinking when you chose the headless woman's figure with breasts and pubic region tied up in ropes as your report cover artwork?  Just exactly what message are you trying to convey?  Are women's minds so inconsequential to you that a beheaded woman was ok provided her reproductive parts were on full display?  Could I please get a psychological analysis read-out on each council members' attitudes towards women because that image on your report cover makes me wonder if you all start from a very, very twisted sick mental attitude towards women.
Posted by Questions from a Ewe at 10:31 PM