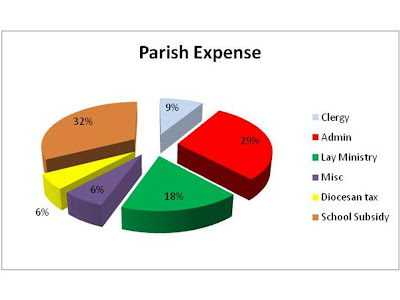 Most of the funding goes towards salaries and subsidizing school tuition.  So, do charitable donations to one’s parish qualify as acts of caritas?
Finally, charity is about helping those in need.  That requires defining “need” and “help.”  Are these defined from the eyes of the person in need or by the person doing charitable works?  When it is true caritas, it is from the eyes of the one in need.
I offer this example.  Once after I was newly divorced, someone anonymously left bags of clothing on my doorstep.  The clothing was really rags so they weren’t helpful.  Furthermore, because I had a good job, I didn’t have a need.  I was actually financially secure enough to be funding a scholarship for other children at the Catholic school my children attended.   But, the incident gave me pause to wonder if the person who did that “charitable” act glowed euphorically for even a moment because they felt they had “helped” someone in “need.”  If so, that was an illusion existing in their mind rather than in reality.
Is your giving about you or is it about others?  Is it personal and connected or impersonal and detached?  Do you perform works of charity or works of caritas?
By the way, the oldest version of the hymn had one additional word, “Ubi caritas est vera, Deus ibi est."  And translated, that means, “Where there is true charity, there God is.”  May we see an increase in true charity so as to experience an increase in the presence of God.
Posted by Questions from a Ewe at 8:19 AM